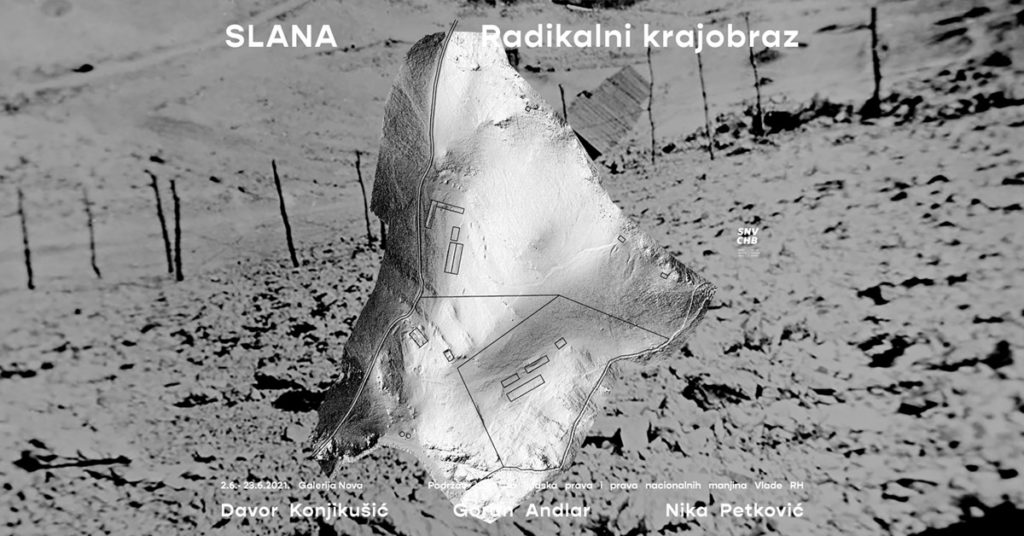 In the Galerija Nova gallery  in Teslina street 7 in Zagreb, visit the exhibition “Slana – Radikalni krajobraz” (Slana – the Radical Landscape”) by Davor Konjikušić, Nika Petković and Goran Andlar. Guided tours are organized on 2 June at 5 p.m. and on 10 June at 6 p.m. Due to the limited number of visitors, those interested in the tour are kindly asked to register with the curator via e-mail: ana.kovacic.whw@gmail.com

Since 2017, Davor Konjikušić and Nika Petković have been working on an extensive artistic research project using Slana bay on the island of Pag as its starting point. This is the venue of the first concentration camp in the Independent State of Croatia (NDH), which existed from June to August 1941. Memorials dedicated to its victims have been systematically and violently destroyed. Moving into this wide open space, “Slana – Radical Landscape” encompasses film, photography and interdisciplinary research in the form of the 3D reconstruction of the former concentration camp. Since the Venetian times, the landscape of Slana has undergone brutal human interventions: from extraction and excessive grazing to establishment of the concentration camp and the more recent tourist exploitation.

The central part of the exhibition is the film Uvala (Bay), whose reductionist approach reveals an unbreakable connection between the landscape and the historic context that has been erased from it. Using methods of “landscape filming”, Davor Konjikušić and Nika Petrović question the process of (historical) eradication and negation of the location of the crime that took place in the summer of 1941 and left its mark in this rugged landscape.

This extensive research of the locality included field research, but also scientific methods of charting, mapping, and analysing the landscape, as well as the historical archives, which served as the basis for the 3D rendering of the camp.

The artistic project “Slana – Radical Landscape” was managed by the Serb National Council, which uses cultural cooperation to encourage artistic projects and research that develop engaged approach to history and the culture of memory, connected with the heritage of antifascism, perishing and genocide of the minority population, and the universal human experience created during traumatic times or their subsequent denial.

Damir Gamulin is the author of the exhibition and of the graphic design of the publication, which contains archive material related to the camp’s history, as well as texts by Goran Andlar, Davor Konjikušić, Pavle Levi, Nika Petrović, Aneta Vladimirov, and Ante Zemljar.

Aneta Vladimirov and Marija Crnogorac produced the exhibition within the framework of the SNC’s culture of memory program, thanks to the support and resources of the Croatian government’s Office for Human Rights and the Rights of the National Minorities.

Galerija Nova’s program is supported by: