The project “Refreshing Memory” connects different professions, communities, services and skills with the aim of preserving memorial heritage and (re)evaluation, acceptance and renewal of antifascist heritage. In its focus are civic, artistic, curatorial, and scientific practices of preserving antifascist values, as well as the issues of historic revisionism, social amnesia and destruction of material heritage and social values.

The exhibition is divided in two parts. The first part, “When Monuments Come Alive”, deals with problems related to historic revisionism, social amnesia, destruction of material heritage and social paradigm. The second part, “When Monuments Come Alive II”, shines a light on the issues of factory closures, uncontrolled disappearance and systematic destruction of architectural and monumental  heritage of socialism. It also highlights some phenomena related to the social structure through works of art which record and critically reflect them. The exhibition problematises the current situation in the society, revisionism, normalisation of fascism and criminalisation of the society. The intention is to issue a bilingual publication with the works of the artists represented at the exhibition. The publication would contain different approaches to monuments, personal poetic approaches, the engraining of the collective memory into the media and public space, and radically critical approaches.

Within the “Refreshing Memory” project, we launched an initiative to renovate monuments to the People’s Liberation Struggle of the Second World War and the victims of Fascist terror. Presumptions that monuments can be renovated were encouraged by calls or accepted proposals for renovation from local self-governments and expressed interest by local antifascist associations. Among them are: the “Monument to the National Hero Stjepan Filipović” in Opuzen, work of the  sculptors Miro Vuco and Stjepan Gračan, erected in 1978 and blown up in 1991, “Monument to the Uprising of the People from Biokovo-Neretva and Central Dalmatian Islands”, work of the sculptor Antun Augustinčić, unveiled in 1972 in Gradac and mined in 1992, and the initiative for renovation of the memorial area in Gudovac near Bjelovar, where next to the ossuary there was a monument by Vojin Bakić named “Before Execution”, erected in 1954, blown up in 1991 and stolen in 2010. Through initiatives for renovation we are getting closer to the concept of ‘a monument to the monument’ – because of the physical impossibility to return the monument to the original spot, destruction of its environment, devastation of the sculpture itself, the fact that it has been melted or that it has disappeared.

As part of the “Refreshing Memory” project, some 85,000 slides from the 1960s to 1980s, owned by the “Turistkomerc” publishing house, have been researched and scanned.

About a thousand photographs of monuments to the Peoples’ Liberation Struggle, to the workers’ movement and the revolution, have also been scanned and catalogued. This material can be viewed on the project’s web-page.

The particular value of this photo-archive is in the materials that are difficult to access: from panoramic shots of memorial areas and landscapes of cities with monuments, to wide-shots of monuments from different angles and specific, rarely seen details of monuments. The archive also contains photos which reflect the socio-cultural context – e.g. photographs with visitors, photos of the scenography of particular events near monuments, banners, landscaping , monuments at their best, recorded moments of tourist and school visits to memorial areas, celebrations, nearby amenities,  and characteristic iconographic details of flags, wreathes, clothes, equipment or vehicles from that period. All this gives the database its specific character, as it provides a more palpable image of the life of the monuments than the one that has been presented in Europe and in America over the past years through photographic materials, brutalist and purged of sociological context.

Apart from the database, also collected were other materials connected to the research, which are being prepared for publication on the web-page. They will be available in the rubric Studies and Research.

As part of the project, the conference “Refreshing Memory” is also planned, which will adopt an integrative approach and include authors from all relevant professions – conservationists, ethnologists, space planners, anthropologists, lawyers, historians, artists, art historians, theorists of architecture – who approach from their different perspectives phenomena related to antifascist memorial heritage, cultural heritage and monuments to workers’ movement, Peoples’ Liberation Struggle, socialist revolution in Croatia and other countries of the former Yugoslavia and (post)socialist countries of the former Eastern Bloc. The focus of the conference is on social-political conditions and models of cultural (dis) inheritance, on a  change of paradigms, laws and institutional frameworks, on becoming familiar with heritage practices related to initiatives of local communities and individuals, and on other critical-activist practices which came about because of a lack of activity by relevant institutions. Ultimately, the conference’s goal is to present models of protection and new perspectives of memorial heritage.

Along with scientific presentations, which are divided in four sections with local and foreign guests, and which were prepared by Sanja Horvatinčić, Lana Lovrenčić, Tihana Pupovac and Maroje Mrduljaš from the Association SF:ius, the conference incudes one round table event, the exhibition “In Memory of Monuments”, a book presentation and workshop by Tanja Dabo, Dalibor Martinis and Siniša Labrović, focused on the topic of revisionism, nationalism and models of the system’s representational strategies. Because of the pandemic, the exhibition has been postponed, but expert texts and editors’ research related to the conference’s thematic units can be accessed on the project’s web page. Potential participants are invited to submit their articles, studies, research and works of art related to different approaches to the topic of memory, potential of memorial heritage and revisionism.

The project “Refreshing Memory” also includes an artistic-investigative sub-project by Tanja Dabo, “Usputno zlo” (“Collateral Evil”), in which she researches and documents evidence of expressing evil in public space, e.g. writings inciting hatred and violence or glorifying criminal periods from our past. In this research, the goal was to collect data about the existing graffiti and writings, establish a web-archive of hate-speech in public space and encourage citizens to react and public institutions to remove and prevent hate speech. For every graffiti that has been found a report is filed with relevant institutions and time needed to act on each case is measured, as well as the efficiency and the will of the system to win the battle against hatred and violence in the public space. Letters have been sent to state institutions, ministries, and judicial institutions with a question about hate speech, hate-mongering, and the iconography from criminal periods in Croatian history. We also expect their official statement as to whether these contents and acts are prohibited by laws and the Constitution in the Republic of Croatia. The letter and the answers will be published after the expiry of the legal deadline for the response.

The project Refreshing Memory of the association “Vizura aperta” is supported by the Council of the Serb National Minority of the city of Zagreb (VSNM), Serb National Council (SNV) and the foundation Kultura Nova.

The project’s author is Davorka Perić. 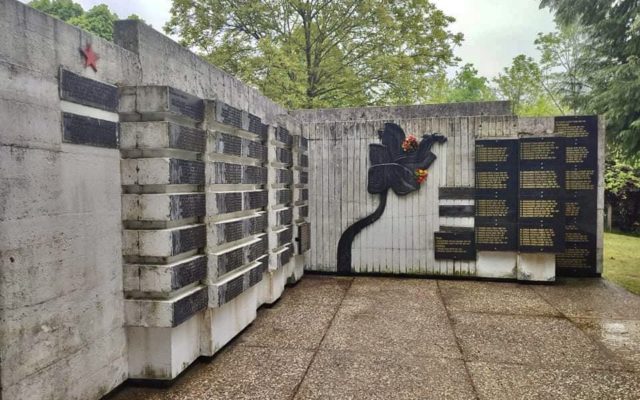 Organized by the Council of the Serbian National Minority (VSNM) of Karlovac County and the organizations of anti-fascists from the Karlovac area, a commemoration was held in Veljun in the … 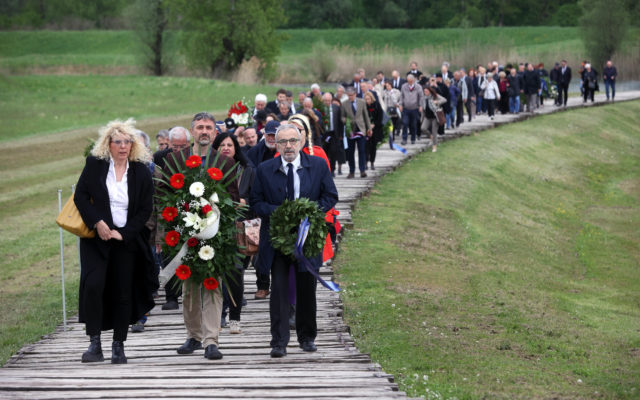 Yom HaShoah, memorial to the six million Jews killed in Nazi and fascist camps during World War II was marked with a commemoration at the foot of the Flower Monument … 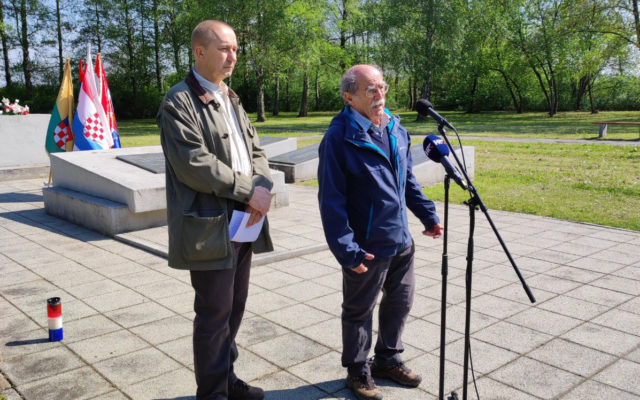 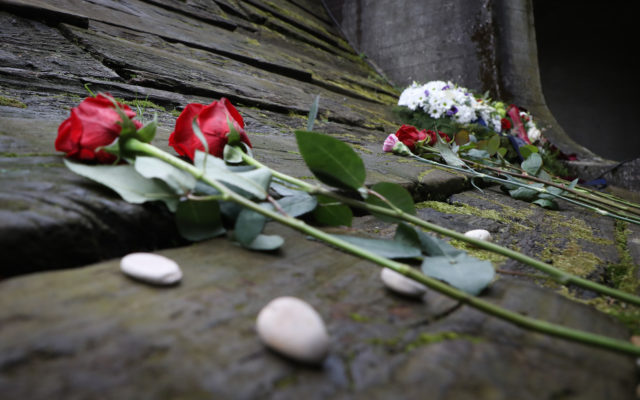 With a memorial walk from the Jasenovac Memorial Museum to the “Stone Flower” monument, ending in laying wreaths, representatives of the Croatian Parliament, Government, national minorities, and antifascists paid tribute … 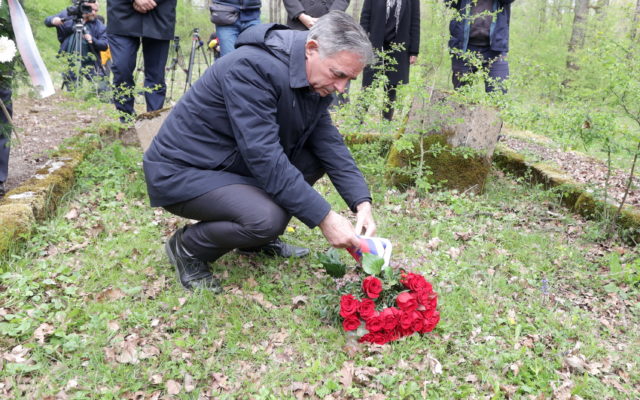 The representatives of the Serb National Council (SNV) visited last Thursday the Krapje Site, a part of the Jasenovac Memorial Site (JMS), where they paid tribute to the victims and …